The Good, Bad and Ugly

I love summer and I find it both challenging and easy to stay on track of healthy eating and exercise.  Not sure what I mean?  Let me explain.

During the summer, my family is outside more.  We take evening walks, play badminton in the backyard and sometimes we just sit around and sweat in the heat.  We also eat lots of in-season fruits and veggies which we seem to love in the summer.  We also eat smaller meals and lighter meals because who wants a heavy dinner sitting in their stomach?

On the other hand, there are more picnics and with picnics come bad food choices; hello macaroni salad, brownies, coleslaw, cakes...  You get the picture.  I could literally eat ice cream every night.  Plus I don't always feels like cooking so we turn to eating out and I have a hard time staying on track when we're eating out.  It's an area of constant work.

I missed the gym for the past two weeks and started again tomorrow.  We have a new Body Pump teacher and yesterday she did an awesome job, so I'm excited about the classes.  Zumba is now Zumba Toning which also excites me.

I started this year hoping to lose 3 pounds per month.  I've slid a bit and stagnated a bit, so I've got some catching up to do.  So, here is to hoping the summer is filled with more watermelon than cookie dough ice cream, more veggie kabobs than convenient fast food and more exercise than sitting in air conditioning.

What are your summer goals?
Posted by Four Foodies Get Fit at 2:19 PM 5 comments:

Getting Up and Running

I'm happy to report another 0.4 pound loss this week.  I should refresh that I have been having trouble sticking to the whole "eat right" thing, so that loss also included about 3 pounds I've gained over the course of several weeks.

I worked out really hard at the gym this week; two Body Pumps, one Step Tabata and one Full Body Circuit which about killed me, but my muscles have never felt so rock hard!

If you tried to read the blog this week you may have noticed that it was closed.  We're currently editing and making a new header.  Mandi is going to be joining me soon and we're revamping some things.  So, please stay tuned.  I'm excited about what we're going to get running.  I'm even hoping to get a giveaway going soon, so please check back.

In the meantime, let me know how you've done this week.  Need some encouragement?  Want to share your story?  Feel free in the comments.
Posted by Four Foodies Get Fit at 6:26 PM No comments:

I promise an updated picture is coming...

I got back on track this week (for the first time this month it seems) and found I lost another 1.4 pounds.  Whew!  It feels so much better to be on track than off.

So far these couple weeks I've been logging some running miles and hitting the gym.  I only made it twice last week (due to a class, luncheon and "forgot my gym clothes") but I think that was pretty good.  I'm aiming for four times this week.

Also, I started a Pinterest account for this blog.  Here is the LINK to the boards.  If you'd like to contribute (and I'd love if you did) let me know and I will add you.  I'd love to build a little community of people sharing recipes, workout clothes and inspirational sayings.  So, if you're reading (and I know you are because I get the stats) please let us know!
Posted by Four Foodies Get Fit at 7:39 PM No comments:

Don't worry.  I'm still here.  I have to say I've spent the past two weeks eating nothing but junk and feeling like nothing but junk.  Monday I got back on track with my eating and have been walking (the weather here has been wonderful) and I attended Body Pump today.  I have yet to actually stand on the scale, but I'm hoping for better results on Saturday morning (or maybe Friday morning because I'm anxious).

I hate falling off the wagon because I always feel like I have to start all over again and this week has been no exception.  When I started running a few years ago (something I hope to pick up again) my friend told me never to go more than two days without a workout.  The reasoning was that one day is okay but that second you're more tempted to quit and so on and so on.

So, for a little inspiration for myself, here's a picture that's been going around Facebook. 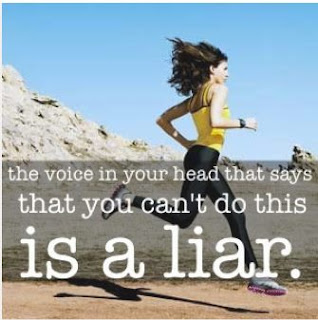 Posted by Four Foodies Get Fit at 7:05 PM No comments: I have officially hit my 10 pounds lost mark by losing 2 pounds this week.  I really didn't even know I was that close until I got on the scale this morning and saw the numbers.  I started a bit before I began this blog, so if you look at the track here, I haven't quite lost as much.  I began on  January 1 with the goal to lose three pounds per month.  Friday was the last weigh in of February and I'm already ahead of schedule which is such a good thing.  I know I'm going to need that later.

I was only able to hit the gym twice this week (once for Body Pump and once for Zumba).  I was also pretty careful with my diet.  I skipped counting carbs and counted Weight Watcher Points instead.  I went into this week knowing I wanted to see a real loss on the scale and I knew Points would do it.  I like being able to switch between programs.

So, what does 10 pounds look like?  I looked for a bunch of images but this was the best I could find:

The fat in the picture represents one pound.  So I've lost 10 coffee cups worth.  Kind of neat!  Here's the Source of the Article which was a nice read.

Any other good losses out there?

By the way, I'm currently trying to get another Foodie to participate in the blog.  One of my sister is pregnant and, therefore, won't be posting.  I'd love to get another one of my compadres working with me.  Are you in?
Posted by Four Foodies Get Fit at 8:08 AM No comments:

So, I think my scale is broken.  The one I have is similar to the one below.

Since my last post I've weighed in every morning and my weight is the EXACT SAME.  I'm talking pounds AND ounces.  The thing has got to be broken or else not very sensitive (both to my feelings and to differing weights).  Finally yesterday I got on and I had lost 1.6 pounds.

My weeks have been going well.  I'm still low carbing it although for Valentine's Day my husband got me this:

Fruit is carb central but at least it's "good" carbs and not bad ones.

So, I'm plodding along.  This week I only made it to the gym twice.  Tuesday I did Body Pump.  I got there a little later and the class was really full so I had to get a larger weight bar than I'm used to.  I'm glad I did because I totally was able to handle the extra weight.  There's a non-scale victory!  Today (Friday) I did Zumba.  Guess who was in my class... Maria Sansone.  I think I'm only familiar with her because I grew up near Erie, so her name is familiar, but she's a host for TV Guide and recently was featured on Chris March's Mad Fashion.  This girl is so tiny.

If that wasn't enough of a kick in the pants to get moving, I came home and got the mail to find the Sports Illustrated Swimsuit Magazine.  I was very tempted to rip pictures out and tape them around my house (like on the fridge) but decided against it.  I don't need my husband staring at those...

So, this week was good.  I saw a loss on the scale and am really feeling strong.

Anyone out there see any victory this week?
Posted by Four Foodies Get Fit at 3:41 PM No comments:

I don't have any pictures yet for this blog as I'm trying to figure out what I would even show, but thought I would hop on to give an update.

Shortly after posting last week, the Weight Watchers kind of went out the window.  I'm not sure what happens, but I tend to lose interest pretty quickly with them.  Maybe because I've gone back to that program so many times on my own and in meetings that I'm just bored?  Who knows.

About a year ago just before finding out I was pregnant I had a doctor's appointment where they thought I may be having trouble with insulin and that I should go low carb.  Because I got pregnant soon after the appointment, they could not do further testing and I have not pursued the issue further.  I tend to get a little hypoglycemic in the afternoons if I haven't been eating well and this has happened for years.

So, I resurrected my Low Carb materials this week and started following that program.  I did pretty well.  I did have a couple slip ups:  My husband brought home milkshakes from Dairy Queen one night.  Luckily it was chocolate (I love vanilla) so I was able to drink only 1/4 of it and be satisfied.  Another night we went to my parent's house.  I don't know what it is about being there that I think I need a cookie, so I went scrounging for one.  I found chocolate instead (also a winner) and ate some peppermint bark.

I'm going to the gym with a friend from work.  We take classes over our lunch hours.  I managed to hit Body Pump, Pilates with a Punch and Zumba this week.  Three out of seven days at the gym probably sounds pretty weak, but I think it's pretty good.  Remember, I have a six month old at home and the last thing I want to do after not being with her all day is go to the gym for an hour, so right now lunch classes are going to have to do.

This week I'm hoping to hit the gym three times again.  I'd go four but I'm taking a class on Mondays that is also during lunch, so I can't go that day and I HATED Pilates this week, so I will probably skip that day too.  I'm not strong enough yet for some of the poses.  I will stick with the low carb and see how things go.

I hope you had a great week too.  If you're reading, feel free to comment on your progress too.
Posted by Four Foodies Get Fit at 7:26 AM 1 comment:

Four Foodies Get Fit
We are three sisters and our mom who love cook food and eat but realize we need to do this in moderation. We are on a journey to get fit and healthy together. Join us as we blog about our progress towards healthier living!